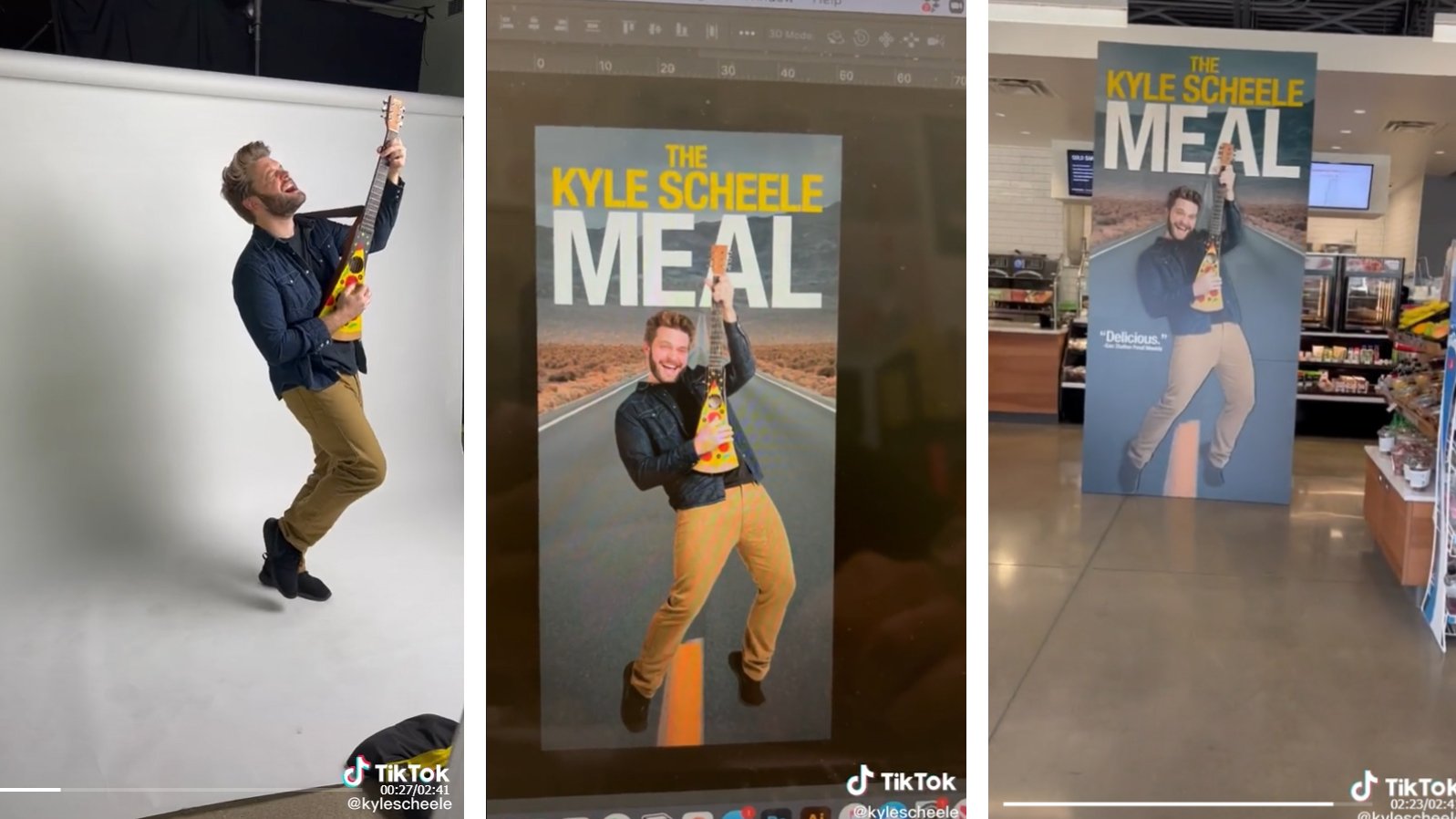 I’m always up for some good pranks and humor, especially if they involve photography. Well, motivational speaker Kyle Scheele did something that really made my day. He recently used his Photoshop skills to make a life-size poster from a photo of himself, and he pranked a local gas station by putting it up in the middle of it.

It all started when Kyle went to a local convenience store and saw a cardboard cutout of rapper Post Malone. He asked an employee if he could have it when they were done with it, and their reply sparked the idea. The employee told Kyle that they had no idea where the posters came from. “It just shows up. Vendors bring it and then it just disappears one day,” they said. “Corporate handles all of that.” This reply planted an idea into Kyle’s mind and he went on to turn it into reality.

He visited a friend who is a photographer and asked him to take a photo of him with a hilarious little pizza guitar. After a full studio photoshoot, Kyle chose the photo he liked best and turned it into a poster. He cut himself out from the white backdrop, added a photo as a background, and of course – a caption to make it all look nice and professional. The poster he made was for “The Kyle Scheele Meal” – no one knows what that it, but we’ll get to that later.

Another friend helped Kyle turn this poster of his into an actual cardboard cutout. He used a huge printer to print out a life-size ad featuring Kyle. Since he’s quite tall and there’s also a huge caption above, the prank ad ended up being ginormous. In fact, it was so large that Kyle had to rent a U-Haul van just to transport it to the convenience store.

The moment of truth: it’s time to bring the cardboard inside and place it inside the store. Kyle put on a cap and a mask so it wasn’t obvious that he was the person in the picture, and it apparently worked. A customer held a door for him, and a store employee even thanked him for placing it there.

Since Kyle posted his prank on his TikTok, the video quickly got viral. At the moment of writing this, it has 2.7 million likes and 26K comments, among which is the comment from the store itself. “We won’t tell if you don’t,” Kum &Go commented. The video even got the attention of 7-Eleven and Adobe, whose comments I found especially funny.

Since then, Kyle also posted an update video to his TikTok explaining what happened later. It turned out that a bunch of people found the “ad,” took photos with it, and send them to him. Some of them also tried to order “The Kyle Scheele Meal” to the utter confusion of the employees.

People also flooded the store’s TikTok account with requests for this meal. Kum &Go even posted a video with the screenshot of the comments and the caption “kumming soon ?????????” So yeah, perhaps you’ll see it in their stores sometime soon if the crowd is persistent enough.